8 of the Top 3D Explainer Videos

Explainer videos need to quickly capture the attention of viewers and retain it. 3D animated explainer videos can be particularly great at doing this. 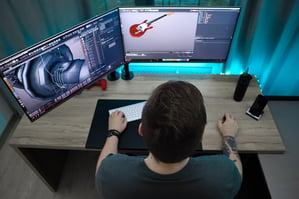 Explainer videos need to quickly capture the attention of viewers and retain this for the duration of the video. To do this you need a unique, entertaining and engaging video that encourages viewers to act. Some of the world’s most famous brands are using 3D animation in explainer videos to captivate their audience.

3D animated explainer videos can go into great detail, depicting situations that you couldn’t in real life, using products that don’t even exist yet. They are also more life-like than other forms of animation, and this helps viewers visualise the context and how the business will help solve a problem. They can also be more entertaining and make for a better viewing experience.

Here at Skeleton, we have chosen are our top 8 3D explainer videos and will explain why we think they’re the best of the best.


Fortune 500 Company General Electric (GE) is a multinational conglomerate based in the USA. They operate through a number of different segments, but this explainer video is for their digital operations. It goes through how the industrial internet is accelerating the efficiency of machines, and how it will impact product development, delivery and performance.

GE’s explainer video follows the distribution of a wind turbine, and outlines how the internet can help generate a range of data that can improve the turbine’s journey to the customer, as well as its performance in use.

The use of 3D is effective because it allows viewers to see what is being explained in detail - this is really important when trying to present such a complex topic to viewers.

Panasonic are well known for their electronics and appliances, and this explainer video is for their 3 blade ES-SL33 razor.

Interestingly, Panasonic opted not to use a voice over. Instead, on-screen motion graphics show viewers how to use the product and the benefits of doing so. The video also highlights why they are better than other razors on the market, and its slick presentation gives you confidence in everything they are saying.

Flowater use their seven step filtration method to purify tap water, producing the ‘best-tasting, healthiest water on the planet.’ This explainer video let viewers know how and why they do this, and also talks about their primary product offering - water refilling stations.

From the very beginning Flowater capture the audiences’ attention. They state the problem, back it up with statistics and say why it affects the viewer directly. They then go on to explain why and how their product solves the problem, again quantifying this with statistics.

Throughout the explainer video viewers follow water through the filtration method, and the use of 3D really emphasises how the method works. It ends with a strong call to action, asking viewers to buy the product and ‘start a revolution.’

Luxury sports car company Ferrari are well-known for their high-performance supercars, and this 3D animated explainer video outlines the vehicle dynamics of their ‘812 Superfast.’

Ferrari’s video shows viewers the improvements they have made since the last model and give figures that support this. They also show the animated car doing a lap to illustrate its enhanced performance qualities. The use of 3D makes this pretty realistic, and this is important as it really makes the viewer believe in the product and its capabilities.

Whilst a lot of what the explainer video is saying relies on jargon that only car-enthusiasts would use, the animation makes it easier to comprehend for those who don’t fully understand the specific language.

Microsoft launched the Xbox One S as a successor to the popular Xbox One. Their explainer video outlines the improvements they have made, and why this console is superior.

Xbox’s video is simple and to-the-point. It focuses solely on the console and how it improves the gaming experience, highlighting that it is slimmer, faster, sleeker and sharper.

The use of 3D shows gamers the precise changes they have made, and the simplicity of the explainer video keeps them focused on the console throughout.

This explainer video addresses the common difficulties of engaging in international trade, and how Import Genius’ software can help overcome these issues. It follows numerous scenarios around the world, encouraging viewers to find the one most relevant to them and pay attention.

Why do we like it? It’s fast-paced, busy and full of information, and it somehow crams all of this into one minute without being too overwhelming.

Now re-branded as OneFamily, Engage Mutual Assurance is a financial support provider operating as a mutual society run by its half a million members.

The Engage Foundation was a five year pledge to make £1 million available to members for things like start-up business ideas, community projects and personal expenses. The explainer video shows the types of projects the money could be used for, and the impact it could make.

This 3D animated explainer video is pretty unique. Although it is 3D, it uses cartoons to tell the story of a number of characters, and this is quite a differentiated approach. It is a really creative way of appealing to viewers and showing the scope of their money's' potential.

UK Supermarket, Tesco, used this explainer video to help customers understand the benefits of using their credit card. It explains how their credit card is the fastest way to earn Tesco Clubcard points and what customers can do with them.

The use of 3D to animate a range of characters personifies the benefits customers could have access to, and encourages viewers to see themselves as one of them.

One of the best things about this explainer video is the consistency of the message throughout. The video aims to show viewers how simple it is to earn Clubcard points and reap the rewards, and this simplicity is reflected in the colours used and pace of the video.

As these examples show, 3D explainer videos can be a great way of getting your business or brand’s value proposition across. 3D can successfully show viewers how your product works and how they will benefit from using it.

The team at Skeleton have created explainer videos for a wide range of brands and businesses. If you think we can help you create yours, please get in touch!