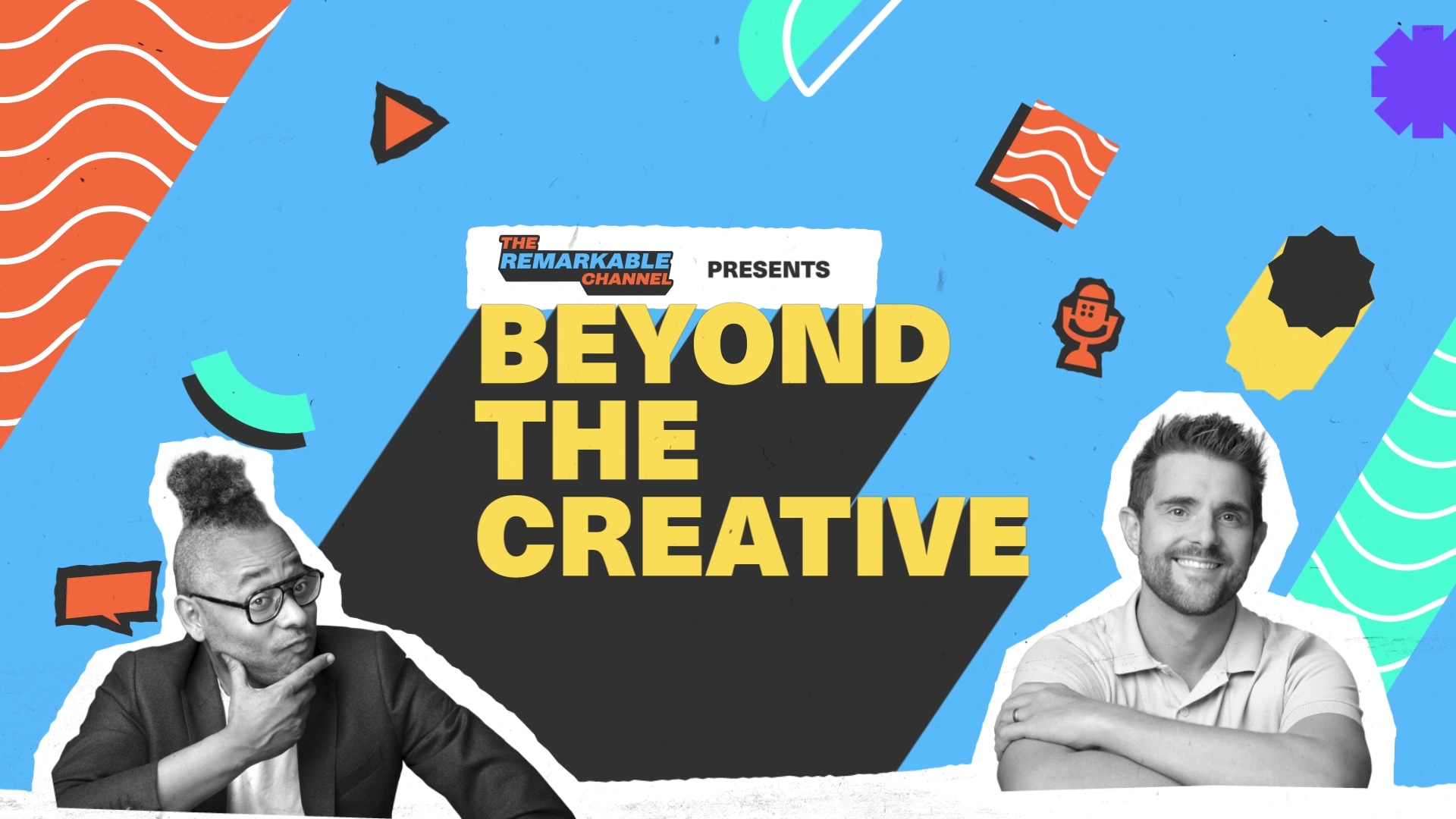 To launch the channel, we have our debut episode of Beyond the Creative, a show where we reverse-engineer and dissect video ads from around the world to go beyond the creative and dive into what core marketing principles are at play.

We'll be continuing to learn and grow from this podcast, so we'd love to hear your thoughts and opinions on this pilot episode! What would you like to see more of next?

Subscribe to The Remarkable Channel on your favourite platform, where we'll be posting every episode as soon as it drops!

Jonathan: Welcome to Beyond the Creative. Every episode we're exposing the daily conversations we have about campaigns we think are interesting insightful or different dissecting reverse engineering and breaking down what they were trying to achieve. But this isn't just about us giving our opinions, each episode will ground those opinions against creative principles we use every day.
Chomoi: So if you're curious about marketing as a service behavioral design and the importance of audience insights you're in great company.
Jonathan: This is beyond the creative, our way of learning growing and ultimately fueling our never-ending quest for delivering creative that changes what people think feel and do.

Jonathan: Welcome to the very first episode of Beyond the Creative! This first show's theme is all about disruption in marketing. Something that's nothing new, it's been around for decades, or really since marketing began. It's all about grabbing people's attention, shocking people, getting eyeballs on ads, selling more products and getting more brand awareness.
It's like a never-ending game of chicken: as one brand pushes the envelope a little bit further, another brand has to up the game. And today, we're exploring how that works and where brands are taking disruption at the moment. [music]

Jonathan: So first up we've got "Welcome to WeTransfer, please leave" and this highlights how digital tools have become a distraction from creative work, but that WeTransfer can play a role in helping people reclaim their time. Chomoi, you flagged this as potentially a disruptive campaign ad.
Chomoi: Happy to jump in on this one. So I think this one is disruptive because it's not your typical sales message. T hey're basically saying "here you are sitting at a screen, but actually, the magic happens away from our product". It's really unintuitive and I think on the on the face of it, it's quite brave messaging. It's a bold tone of voice and it's not really what you expect from a file transfer company, so from that point of view I think the actual way they come across in the scripting in the voice-over, yeah, it's pretty disruptive.
Jonathan: Yeah I'd agree, I think it's obviously not heavy on the sales message and it's kind of saying "get back out in the wild and find that source of inspiration that made you fall in love with being a creative in the first place" and that's, y eah that's cool. I think it's been done before. Yeah, it's interesting how disruptive or kind of controversial this is, but I guess for those people that haven't seen it, should we run the campaign? Let's run the ad. For those of you that are listening, you can pop over to our YouTube channel and check it out. Um but let's run the ad.

[Music] [Voiceover] "Have you ever thought about the other you? The you that you felt truer to. What would you say if you saw your life wasting away stuck online inhaling content, exhaling time? But oh, the you that flew the coop to prove that life could move in any way you got to choose.
You left the screens looking for the life between the life you have now and the life of your dreams. You've found it there swirling twirling and the crisp fresh air. Everything you've read about, tweeted, liked, posted out. This is where it all comes from the real world that you can feel world.
And when this other one of you returned to see what it could do, you poured your heart into the keys as quick as possible to see what to keep and what to free. T hen once again, it was time to leave."

Chomoi: It's simple scale from 1 to 10, where 10 is the best you can possibly do. 10 is world-changing creative. And 1 is really work that shouldn't exist in the world, you know, it's destructive. So, I like to think of really trying to ignore like 1 to 4. 5, you want to be in the middle at least and start there. And 6 is an intelligent idea. 7 is an inspiring idea that's beautifully crafted. 8 changes the way people think and feel. 9 changes the way people live. And 10 changes the world. So I have to think about whether it's an idea that... as a piece of creative... has maybe saved someone's life. T hat would be an ultimate KPI for work.
And when we look at this idea, my gut tells me it's hovering around a 5. J ust that it's very clear what their purpose is as a brand, they've got their tone of voice nailed with this piece, their message is pretty clear. So it does kind of say what they stand for, "we stand for creativity and ideas and inspiration and we stand against overuse of screen time and being stuck in front of the screen watching loading bars". So that kind of makes sense for the brand. So yeah, I kind of pegged it at a 5.
Jonathan: Yeah I'd agree with you. I think 5 is spot on. People do know the brand's purpose... I'm slightly hesitating because I'm like... is it clear what the brand purpose is or in this campaign is it just that they're encouraging people to get back out into the wild? But I think there's enough in the message there of the kind of the purpose and the values of the brand coming through. I don't think it's quite.... is it that intelligent? Not sure really. I don't think it quite gets there. So I think we're probably in agreement, 5 is the right score. And this is a tough scale, you know! It's not easy, right? Climbing this ladder. I think 5 is probably fairly average, good, it's a solid piece of communication, and it's a solid piece of brand work.
Chomoi: It is quite a hard scale. And when we started talking about this piece of work, I really really liked it. It really felt disruptive, but I think when you start to sort of take a step back and analyze it as we have... you know we've talked about behavioural design, we've talked about marketing as a service, we talked about entertainment, and actually, it's quite hard when you look at it through those those lenses and those filters. And then when you apply the scale, you see how traditional marketing starts to fall by the wayside. It doesn't work as well as harder working campaigns that tick the behavioural design box, or tick the marketing as a service box, or tick the marketing as entertainment box. So yeah, I feel harsh giving it this score. But this is really a sort of journey for us, isn't it? Of learning, honing our techniques, and always trying to do better work.

Jonathan: Okay, so the second campaign we're gonna be looking at today is the Coinbase Super Bowl ad from 2022 just from a few months ago. And this is the famous QR code bouncing around the screen, this was definitely bold and different, it was disruptive. I mean, it went viral and that's normally a sign of something that's different. A nd the Super Bowl is a... doesn't everyone just look to the Super Bowl for what ads are going to be coming? And there's been some classics over the years, but this was probably a media first in terms of something so minimal bouncing around the screen for 60 seconds at the cost of... I think it was 16 million dollars? And it worked! You know, in terms of driving curiosity it crashed the Coinbase website it drove so many people. So many people scanned that QR code, curiosi