GoPro's channel has become one of the biggest and most successful on YouTube thanks to their close community. Here's how they did it.

Since GoPro joined YouTube in 2009, it has become one of the most successful brands on the channel. In fact, it is consistently ranked no. 1 on YouTube's own "Brand Standing" leaderboard.

So how did they do it? In just a few years the company behind the famously tiny high-definition cameras has cemented itself as one of the most viewed, most shared and most popular channels on the biggest video sharing site on the web. And this is a site notoriously hard for businesses to crack, Touchstorm reports that only 2% of the top 5,000 YouTube channels belong to brands.

It all comes down to GoPro's highly effective YouTube strategy, which focuses on building a strong and close-knit channel community to supercharge the brand's subscribes, shares, and thereby reach. Keep reading and we'll explain just how GoPro keeps a firm hold on its no. 1 status.

Originally, the company hired extreme athletes to show off what could be achieved with its cameras. But as awareness of the product increased, users began to upload and share their own videos. At the end of 2013, GoPro launched a couple of user-submitted videos to its channel. They became hugely popular, and the rest is history.

By embracing user-generated content GoPro allows its customers to feel part of a global yet intimate community in which they are not only personally endorsed, but also given the opportunity to rack up thousands of views and shares. Really, they're offered a moment in the spotlight, to inspire, shock, and entertain others. They're given a unique chance to truly 'be a hero' (reinforcing the brand's strapline).

GoPro encourage this reciprocal relationship because, obviously, it offers them a mass of incredible free video content. But it also makes their customers feel closer to the brand, increasing customer loyalty, retention and advocacy. In essence it can turn customers into evangelists, into fans.

Part of GoPro's desire to create a real community necessitates actually being involved in that community. That's wChy the company regularly replies to user comments, answers questions and generally engages in constructive conversation on its YouTube channel. 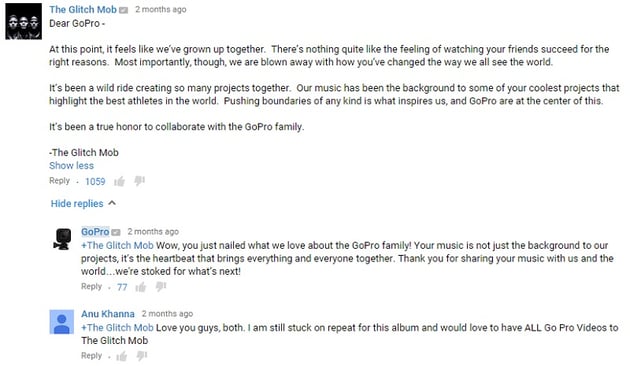 GoPro loves to make its viewers feel valued. And by helping out customers when they have an issue or query, the business also encourages reciprocity, a psychological behaviour that means people feel compelled to return favours (no matter how small).

When it comes to engaging with its community, the brand really doesn't hold back. Looking at its YouTube activity feed, it's clear that, each and every day, GoPro takes the time to watch and like some of the best related videos on the site. From space walks filmed on their cameras to athletes performing groundbreaking stunts, GoPro is always committed to its community content.

3. Appeal to All Segments of Your Audience

But GoPro has expanded its appeal far beyond just extreme sports and adrenaline thrills (like this insane bike backflip over a 72 foot canyon). They feature a broad range of video content, from footage of music concerts to heartwarming animal videos, like this fireman reviving a tiny kitten. 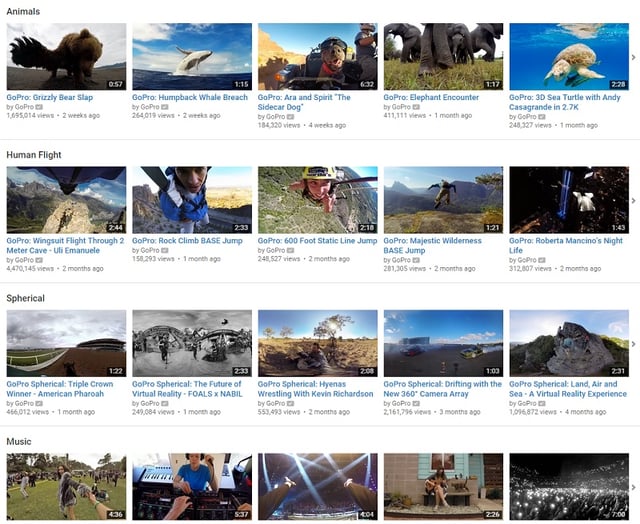 While the company's core target audience is sports and/or photography fans, they have looked to both expand their audience and appeal more directly to certain segments in their existing audience. This means an increase in more popular videos (music and animals) as well as the categorisation of more specific types of extreme activity (human flight), which is backed up by GoPro's choice of YouTube channel playlists.

By expanding the types of videos they feature, GoPro has also successfully expanded its subscriber base on YouTube, as well as its reach across the site. This isn't just a superficial boost in one-time viewers, by releasing consistent, quality content GoPro has been able to appeal to various different audience segments, drawn them into their community, and keep them engaged (and sharing) over time.

We already know that GoPro features user-generated content on its YouTube channel. But GoPro is smart about the way it shares its fans' content. It repackages the videos, not in an obtrusive way, but with the brand's logo at the beginning and end, some music, some editing, and an end card featuring Calls-to-Action (CTAs) to other relevant videos. 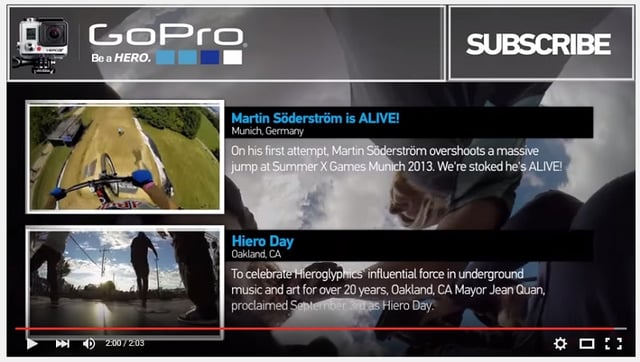 In doing so, the brand encourages viewers to subscribe, watch more content, comment on more videos, share more clips and ultimately stay more engaged. This is a large part of why GoPro's YouTube community strategy works so well: they embrace the power of CTAs.

And GoPro's CTAs aren't just tacked on, but tailored specifically to the video they follow. For example, after watching a man backflip over a canyon you are encouraged to view similar gut-wrenching bike stunts. After watching a kitten being brought back to life, you are pointed towards other adorable animal clips or emotional experiences caught on camera.

So GoPro is always driving viewers to delve further into their YouTube community, and doing so in a way that feels very personalised to each segment of their audience.

That's how GoPro maintains its close community on YouTube, which in turn means viewers feel more positive about the brand, increasing engagement and the amount of shares and reach GoPro receives. By treating YouTube as a social channel made up of communities, rather than a platform on which to post content but not interact with, GoPro has become one of the biggest and most successful brands on the site.