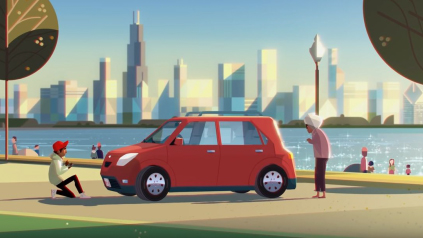 5 Fantastic 2D Animations that have had Great Results

Some of the world's most successful businesses and brands are increasingly using 2D animation in their video content, with great success! The team at Skeleton have compiled a list of our favourite five 2D animations, from a variety of animation production companies to get you inspired!

Some of the world's most successful businesses and brands are increasingly using 2D animation in their video content. It's everywhere these days.

But why is this? Well it's pretty simple really. It's proving to be a great way to communicate complex ideas and messaging to audiences, and the results speak for themselves!

To showcase this success, the team at Skeleton have compiled a list of our favourite five 2D animations, from a variety of animation production companies to get you inspired!


Metro Trains released a short animated music video called "Dumb Ways To Die", in order to highlight safety around trains, such as ignoring the barriers on a level crossing. As the campaign was aimed at younger audiences, the animation company decided to go with a fun, 2D style.


Due to the simple style and humorous tone you might not immediately realise what the video is actually about - being safe around trains. The message doesn't come till nearly the end of the animation, and the animation company ensured they pulled the viewer in with cute animation and a funny song in order to emphasise how dangerous trains can be.


This video is one of the most talked about and shared ad campaigns in Australia, and has also won multiple awards! Not only that, a karaoke version of the song was released, soon to be followed by an interactive app and a children's book. This is proof that 2D animation production companies can make a huge difference to your company with the right video!

2. June:  Life is Better When You Share the Ride


Taxi company Lyft released a short film to celebrate the connections which can be made between Lyft drivers and their customers. The video focuses on an elderly woman, June, who gets a lot of fulfillment out of driving those around her to their destinations.


The video works well as a stand-alone video, so without the Lyft branding sprinkled throughout the piece, you wouldn't realise you were being advertised to.

Due to the thought-provoking nature of the piece, the video, and subsequently the brand, will stick in the audience's mind.


YouTube searches for "Lyft" hit peak 2 days after the video was released, nearly tripling in popularity. Although people were using YouTube to view the video, rather than to book Lyft's service, the result is still a high level of brand awareness.


June communicates Lyft's brand strategy, their key rational attributes and benefits, and touches on their customer base, all in one video, with no dialogue. On YouTube alone, the video received over 7 million views, and the comments section is full of positive sentiment.


You are probably already familiar with Google's Doodles, featured on specific days on the Google homepage.

To commemorate John Lennon's 70th Birthday, they shared a short animation in the style of John Lennon's own artwork in order to celebrate his music and achievements.


By combining John Lennon's music with his own style of "doodle", Google created an emotional response within his fans around the world.


This was also Google's first video doodle, and it paved the way for many more animated videos to be featured on their homepage.


The doodle was interacted with by nearly every country on Earth, whereas many Google Doodles just impact certain countries. As a result, Google has continued to work with 2D animation production companies around the world to produce more animated doodles.

Kronos offer HR services to help employers give their employees the best possible experience. They worked with a 2D animation company in order to raise awareness about International Women's Day among their staff and customers.


The animation puts a key focus on everyday problems which many people face and reveals that the minds behind the solutions were women. The animation can reach a large audience because of this relatability. The 2D animation then discusses how opportunities for women in the workplace have evolved, ensuring the connection between Kronos' services and the content the 2D animation company produced.


The video amassed over 600,000 views on YouTube alone, showing how far this 2D animation reached. As at this point in time, the views were larger than the number of followers on the Kronos YouTube channel, this is a clear indicator that the video was shared further than just their channel.

Satair is a world-leading provider of aftermarket services and solutions for the civil aerospace industry. They wanted to create an exciting recruitment video in order to expand their team and reach the best potential employees possible. This video would be shown at one of their recruitment events, aimed at internal employees from the rest of Airbus Group to work in their subsidiary, Satair Group. The core focus was men between 20 and 40 years old.


The speed of the recruitment video captures the attention of the audience and keeps their attention until the end. The fast pacing of the edit, combined with the 2D text and exciting music gets the point across in an effective and interesting way. The aim of this video was to get people's hearts pumping, and here at Skeleton, we believe the combination of 2D animated text and live action did just that.


The goal of the video was to encourage people to attend a recruitment event. This was a total success - after the video was posted, the tickets for the event sold out within a couple of hours. At the event itself, the video was very well received.


2D animation can be used in a variety of ways to create something unique for your business or brand. You just need the right animation company to work with. Here at Skeleton we offer full-service campaigns and have a team of specialists in 3D / 2D motion graphics, character, live-action and animated interaction, typographic & hand-drawn animation.


If you're looking to get great results using animation, get in touch!